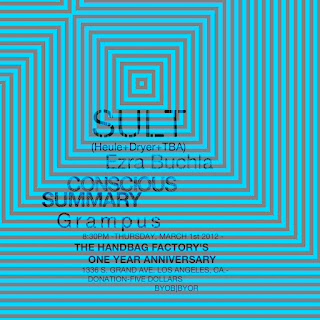 Our 1 year anniversary. How sweet.  Facebook Event Sult is a Norwegian/American quartet playing sound-oriented improvised music. Drawing inspiration from contemporary music, electro-acoustic improv and noise, they seek abrupt consciousness and reflective chaos. Intensity bubbles beneath the surface of carefully applied so nic textures, sometimes erupting into flowing physicality and expressivity. As the core members of the Bay/Oslo Mirror Trio, they have been working together since January 2008. Members of the quartet have performed extensively with their own projects Ettrick, Basshaters, Peninsula Project and Art Directors, and have worked with other groups such as the Flying Luttenbachers and Barn Owl. Dryer and Heule have maintained a trans-American trio with saxophonist Jack Wright since 2008, and have performed live with musicians such as Michel Doneda, C Spencer Yeh, Gino Robair, and Damon Smith. Their trio with Jacob Lindsay released Idea of West on Creative Sources in
Post a Comment
Read more
More posts